Warning: count(): Parameter must be an array or an object that implements Countable in /home/customer/www/everydaymindfulnessshow.com/public_html/wp-content/themes/maronpro/lib/metaboxes/init.php on line 746
 019: Sean Stephenson - the Influencer - "Everyday MINDFULness" Show

In this special one-on-one interview, Mike talks with his long-time friend and confidante, Sean Stephenson. Sean’s mission is to rid the world of insecurity, and his vision is in full swing. His thousands of videos have touched millions of people – including one video that has been seen 1/4 Billion times. Sean’s mindfulness keeps him grounded in what is really important in life, and his ‘When Life Works’ and ‘When Life Sucks’ lists remind him to be grateful for every experience.

Mike and Sean reflect on the deep compassion they share for one another and how their hard-care honest friendship benefits them both.

[1:34] Sean shares his mission with the help of ‘friend-tors,’ or friends who are also mentors.

[9:11] Without mindfulness you can get caught in a trap of it never being enough.

[27:17] The Four Agreements is Sean’s go-to book for mindfulness. 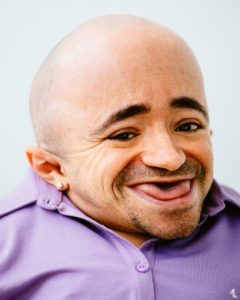 When Sean was born doctors predicted he would not survive past birth because of a rare bone disorder that stunted his growth and caused his bones to be extremely fragile. Despite these challenges, he’s taken a stand for a quality of life that has reached millions of people around the world, including Sir Richard Branson, President Clinton, and his Holiness the 14th Dalai Lama.

Sean has appeared on everything from The Oprah Show to online videos with hundreds of millions of views. The Biography Channel did an hour feature on his life called, “Three Foot Giant.”

His message has been heard at live events in over 16 countries and 48 states over the past 23 years. Sean’s latest book, Get Off Your But, has swept the U.S. and been released in almost a dozen languages around the world.

As a board-certified therapist, Sean uses humor and compassion to develop a fun environment where individuals open their hearts and minds for lasting empowerment to occur.